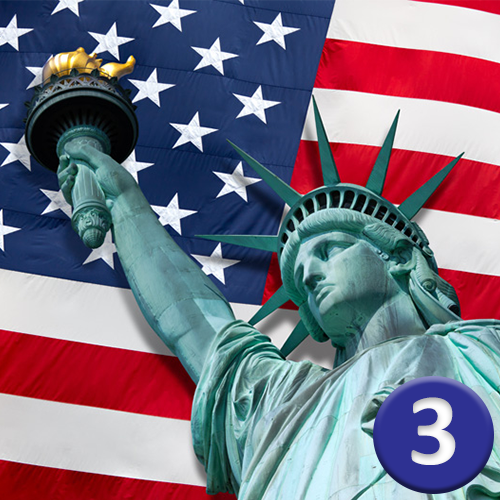 Introduction to the United States: Part 3

These are the 25 questions answered and explained in Part 3 of this course:

C: RIGHTS AND RESPONSIBILITIES
51. What are two rights of everyone living in the United States?
52. What do we show loyalty to when we say the Pledge of Allegiance?
53. What is one promise you make when you become a United States citizen?
54. How old do citizens have to be to vote for President?
55. What are two ways that Americans can participate in their democracy?
56. When is the last day you can send in federal income tax forms?
57. When must all men register for the Selective Service?

A: COLONIAL PERIOD AND INDEPENDENCE
58. What is one reason colonists came to America?
59. Who lived in America before the Europeans arrived?
60. What group of people was taken to America and sold as slaves?
61. Why did the colonists fight the British?
62. Who wrote the Declaration of Independence?
63. When was the Declaration of Independence adopted?
64. There were 13 original states. Name three.
65. What happened at the Constitutional Convention?
66. When was the Constitution written?
67. The Federalist Papers supported the passage of the U.S. Constitution. Name one of the writers.
68. What is one thing Benjamin Franklin is famous for?
69. Who is the “Father of Our Country”?
70. Who was the first President?